Another week down and it is time to report my activity.

We left off on a dark note so I will try to get this post to raise a bit more positive energy!

My last accomodation status was living in a Airbnb room.

Wednesday (July 12th) I was invited to Britt’s (Marks Fiance) Design studio to help with Flower prep.
I have to admit I did not know who was crazier, Me for trying to know what to do or Britt for risking me having a go! 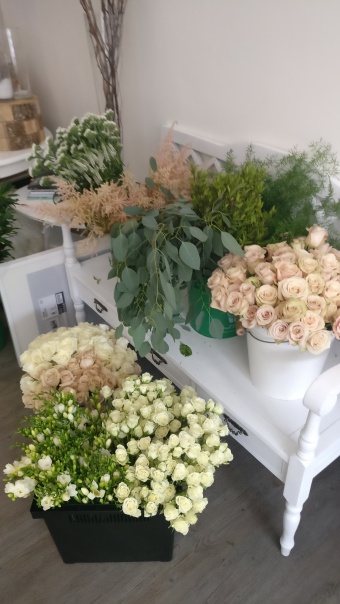 With the recent low feelings I was looking forward to seeing someone I knew and had experience of moving to Toronto themselves (Britt moved to Toronto on her own a few years back and started ‘Inspire Event Rental & Design. www.inspireeventrental.com)

Britt showed me around ‘The Junction’ which had a much more relaxed vibe going for it.
It was relaxing to be somewhere that felt like a community.
Shops owners from around would enter and say hello to me by name! I was shocked to know how many people knew I would be there.

We strolled through The Junction popping in to shops and a Bar for a beer.

We then popped in to an awesome store called “Made by Madrigal” http://www.madebymadrigal.com/

I was introduced to Yadder, who was busy staining a handmade coffee table.
His hads were gloved and dripping with woodstain so we opted for a ‘Elbow Bump’.

Yadder and his Wife Stacey started the business together and make a wide range of handmade furniture. Yadder explained the amount of work he was currently carrying out after a successful deal with a chain store who were buying his creations.
The junction was a street of hard working, self inspired, talented individuals.

I was branded a “Junction Person” rather than a “Downtown Person” by Britt.
This was certianly a place better suited for hanging out.

Last Thursday (July 13th) I was packing to visit Cottage country with a large group of Friends that I was kindly invited to by Mackenzie (Mackenzie and I met in Brussels, back in 2015 when I was on a stag do returning from Nurburgring).
I was still very on edge about my accomodation situation so I booked a new Airbnb room for the following week when I returned from the Cottage.
I continued searching on all known sites for somewhere to live but the struggle remained.
I had a glimmer of hope when a Guy (Alex) replied to me on craigslist to take over his Sublet for the end of July and the whole of August, So I walked 40 minutes across town to view a 1 bedroom basement apartment.
Upon arrival I was met by a similarly looking guy to myself (Although around 15 years older and tad more weight… So likely me at that age if i continue with my Burrito diet!)
The guy seemed friendly but a little flustered.

He (Alex) started to ask me questions about myself as though i was applying for a job but made out as though the room would be mine.
He then continued to say that in fact he had so much interest that he was awaiting his Landlord to make the decision on who would be allowed to take over the lease (I was a little annoyed at having walked so far just to be told they already had plenty of options but who am I to complain in my current situation)
He was very keen to get the lease signed over as he wanted to leave town that very evening.

I told Alex I was interested and he seemed happy for me to take it over so he text his Landlord and we waited at the front door of the basement.
A smiley middle aged lady came downstairs to the door and Alex introduced us and said he would like to know if I could take over the lease for 2 months.
We laughed and joked about what Alex would be removing from the room and I made it clear that as long as the bed and Mattress stayed I would be happy!

Awkward silence fell upon the 3 of us and Alex said “OK, I have your number and will call you later to confirm”
I left feeling happy and confident the room would be mine.

On the walk home my anxiety turned to relief and I lazily walked unknown streets back to my Airbnb. I bumped in to my Airbnb Host Blake and his Wife Sophie on their pushbikes half way back after hearing a loud “HEY, STU!”.

I settled down for the evening watching ‘US Office’ trying to forget about it as I focused on the idea of a relaxing weekend at the Cottage on a lake.

10pm Rolled around and I checked my phone for messages from friends and family.
Whilst checking my emails i had seen another reply from a Craigslist advert for a room just around the corner from my Airbnb. The room had been advertised for over a month so I was never really expecting a response.
I had emailed the advertiser (Sabrina) explaining who I was and what I was doing in Toronto – I also sent a link to this Blog for her to get an idea of who I am (An overthinking moron, I hear you shout!)

Sabrina replied and said “The room is yours if you want it! Feel free to come see the room tomorrow afternoon (Friday 14th)”
This was no good as I would have been on my way to the Cottage!
I replied asking if I could view first thing in the morning at any hour seeing as i was just around the corner.
Sabrina replied and said it was fine to swing by at 10am.

10am rolled around so I grabbed my documentation and cheques to go view the room.
A 3 minute stroll saw me arrive at the house with Sabrina sitting outside on the porch.
We went upstairs and checked out the room which was large, bright and most importantly… had a bed!

Sabrina ran the rent and the duration. There are 2 other housemates living here but they were asleep.
I explained I would be away for the weekend but I would take the room.
Money transferred, keys handed over and I had a roof over my head up until September 1st *HUGE SIGH OF RELIEF*

Roll on the weekend!

I was grabbing a ride to the Cottage with Mackenzies sister, Jamieson and her Partner Trentt.
Trentt showed me around their local area (The Distillery) which had a very classy feel to it and then escorted me to pick up Beer for a easy weekend session.

The drive up took 4 hours and I was able to see a much greener side to Canada. The stress of downtown was left behind and I grew more and more excited for the weekend.

We pulled up to the cottage and my mind was blown. The inside of the cottage was not what I was expecting – I have not seen houses this well furnished and decorated.

The weather was very wet on arrival but that did not stop me and Trentt cracking open a Beer to pass time whilst we waited his friends and their partners arriving.

Mackenzie and Jamieson insisted that I try a ‘Bloody Caesar’ (Please google this).
The drink was not for me. I felt as though it was a meal more than a relaxing beverage.
2 sips and I was done – The next day I shivered when I saw “Clamato Juice” on a supermarket shelf.

After about an hour the other guys and gals started arriving, The cottage became a hive of conversation as the friends all caught up and I introduced myself.

Canadians are sure the friendliest people I have ever met and most already knew my name and what I was doing here before I had to explain.

Meals were split in to teams of 3.
The first evening (As well as each following meal) resulted in a feast.
Seasoned Chicken and Vegetable Kebabs.

The next morning I was told I would be going with “Powers and Nate” to buy our Meal for Saturday evening.

We set off in Powers car and the 2 of them were throwing light insults at eachother and classed it as a fight. I could not help but sit back and feel I was watching a comedy show, The 2 of them were bouncing off of each other so well and I found the whole 2 hour shopping journey hilarious.

When we got the supermaker in Port Carling I was told by Powers we would be making Tacos… This was very welcomed news.
Powers threw out the orders and off we went around the store stocking up on ingredients to make a big order of Tacos.
1 hour later and a bill of $265… we were ready to head back via a detour as Powers insisted we visit the local town to see the upcoming areas in Muskoka.

We finally arrived back to the Cottage to much better weather than the evening before:

We spent the rest of the day in the Lake with cold beers, Vodka Tonics and Sangria.
My anxiety levels were 0 (Alcohol eh!)

After a great weekend, everyone started to set off so I took the oppurtunity to have one last breath of Lake air. #cottagelife 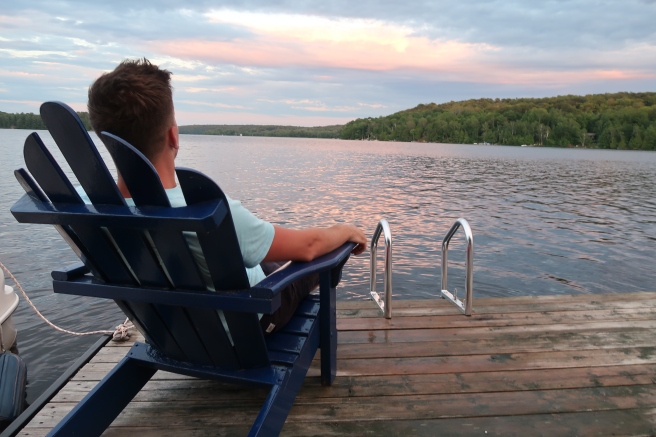 I was lucky enough to head down to Guelph and see surrounding areas, Including “Wine Country”. 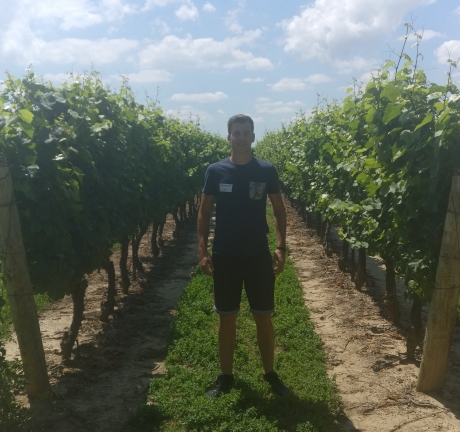 Also with Niagara so close, I was able to go and experience the Falls. 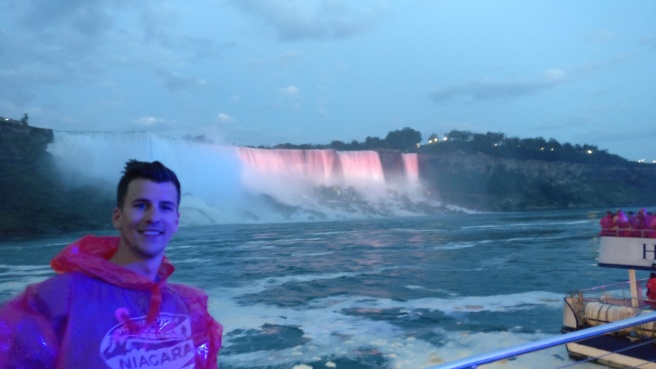 The weather had been pretty rough at times over the last week but I was feeling a lot more relaxed knowing I had a place to rest my head.

Friday this week (July 21st) I have an interview for an IT company I mentioned in the previous post, so my attention and focus turns towards that.

Things are starting to settle now I have started meeting more people and seeing more places other than downtown Toronto.

I hope to bring more positive news and occurences in next weeks Blog update.

Apologies for the lengh and typos in this post (I had a lot to get out of my mind and on to here!)

View all posts by Stu White